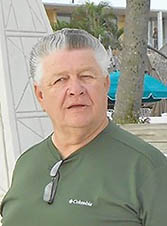 Willy was born July 12, 1941, to Paul and Margaret (McAllister) McHugh in Guthrie Center, Iowa, and was raised and educated in the Jolly and Lytton area in Calhoun County. Willy has one brother, Dennis McHugh of Sioux Rapids.

Willy met the love of his life, Linda Filer, at the roller rink in Fort Dodge. Willy and LInda were married August 27, 1962, and were blessed with their son, Matt McHugh.

The family moved to Thor, Iowa, in 1967, where Willy began operating a fertilizer plant for Tuloma Gas, which turned into Standard Oil and later ConAgra. He helped the local agricultural community with fertilizer and agricultural chemical applications along with custom field work.

In 1988, Willy became a District Sales Representative for Fontanelle Hybrid which he enjoyed until retirement in 2005 and it was then when they made their East Lake Okoboji cottage their permanent residence.

From the beginning, Willy & Linda shared the love of travel, lake life and meeting new people. Willy loved being on and around the water and together, they traveled from Thor to Okoboji almost every weekend. He enjoyed life and all it offered and was most content at the Lake spending time with family and friends. Many may not know this, but Willy enjoyed drawing scenery and people. He was quite talented, and we will cherish his art forever. Willy and Linda worked together to build a beautiful life and cherished their love and time together.

Willy and Linda have celebrated 58 years of marriage and have been blessed with their son, Matt and his wife Kris, who reside in Arnolds Park. It was in 1998 and 2000 when Willy and Linda were blessed again with grandsons, Alex and Dylan. Willy loved his grandsons fiercely and could rarely say no to them…. Alex and Dylan are proud knowing they are the only ones achieving this accomplishment. He loved spending time with them, boating when they were younger, fishing off the dock, and telling them stories of “when he was younger…”. There wasn’t much they couldn’t talk Grandpa into doing. Needless to say, the three of them might have gotten into some trouble once in a while.

Together, Willy and Linda worked hard and feel very fortunate to have achieved two personal goals…. living in Okoboji and being able to spend their winters in Fort Myers.

A wonderful son, husband, Dad and Grandpa. We love you and we will miss you, Willy.

Preceding him in death were his parents Paul and Margaret McHugh.