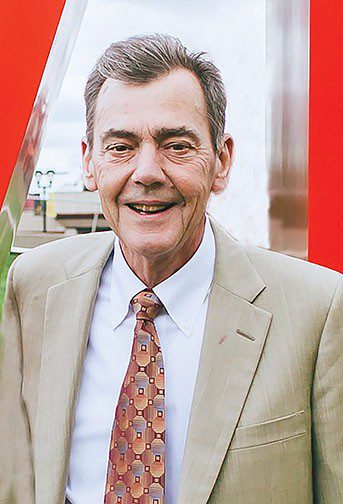 Steven Craig Cook, son of Jack J. and Flora June Cook, was born on June 15, 1953, in Emmetsburg, Iowa. Steve graduated from Emmetsburg High School in 1971. He later attended the University of Iowa until he began to find his life’s work and love and transferred to the Kansas City School of Watchmaking in 1973. Steve was united in marriage to Patricia Ann Storck on his twenty-first birthday, June 15, 1974. They had two children, of whom Steve was very proud.
To further his education and training, Steve went on to the Gemological Institute of America (GIA) in Santa Monica, California, graduating Graduate Gemologist in residence in 1976. Following the GIA, Steve worked back in the Kansas City area for 3 years before returning to Emmetsburg in 1979. Steve and Patty purchased Potter’s Jewelry store, taking ownership on January 1, 1980, as Steven’s Jewelry. In April 1984, they expanded the business and moved across Broadway Street to a much larger store. Then, in October 1993, they expanded again by opening a new Steven’s Jewelry in Spencer, Iowa. On June 15, 2013, after 33 years in business, Steve retired … only to open a small shop in Emmetsburg a few months later because he could never give up his work.

Since growing up in his parents’ home in Emmetsburg on the lake and golf course, golf was another lifelong passion of his, but more often than not, he left with the money. If the Hawkeyes were playing, football or basketball, he was watching. Steve loved going to concerts and some of his favorites were Electric Light Orchestra at the Hollywood Bowl with his family in 2016, and in his earlier days to Jimmy Buffet, Eagles, Eric Clapton, Bob Segar, and the Spinners with Patty. He always wanted to see his all-time favorite the Beatles.

He enjoyed many “spring breaks” after a long holiday season in the retail business with his family on the oceans and beaches in Mexico, The Bahamas, and Hawaii. But there was no place like home to return to, sitting on his deck, looking out over Five Island Lake with a good cup of coffee or on a Last Call boat ride with a Crown & 7.
With his family by his side, Steve passed away at his home on Wednesday, April 22, 2021, at 11:11pm, at the age of 67 years old. Cancer took his life too soon. He was preceded in death by his parents, Jack and June Cook, and his older, brother Robert “Bob” Cook.

Steve is survived by his wife, Patty, of Emmetsburg, Iowa and Las Vegas, Nevada; his son and daughter-in law, Robert “Robby” Charles and Mio Nagumo Cook of New York City; his daughter and son-in-law, Nicole June and Michael Dean Gunderson of Des Moines, Iowa; his grandchildren, Mason Kyuzo Cook (3 years) and Coco June Gunderson (10 months); his sister and brother-in-law, Jackie and Dan Cassiday of Topsfield, Massachusetts; and his niece Jessica Sellountos of Marblehead, Massachusetts. There are many many friends who consider Steve family.