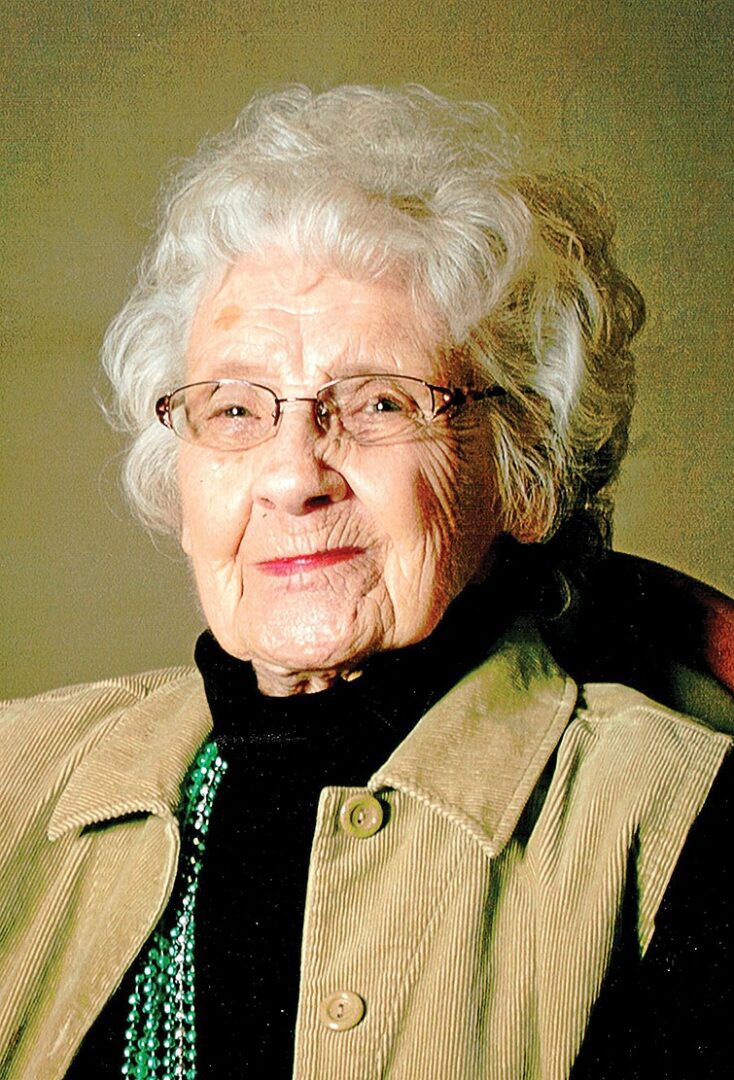 Memorial services for Ruth will be held at 1:00pm on Thursday, November 7, 2019, at St. Alban’s Episcopal Church in Spirit Lake. Burial will take place in the St. Alban’s Episcopal Church Columbarium. Arrangements are under the direction of the Schuchert-Lentz Funeral Home in Spirit Lake. Online condolences may be sent to www.spiritlakefuneralhome.com.

Ruth was born at home August 28,1920, on a farm near Royal, Iowa. She was the first of five children. Life was hard growing up in the depression. She picked corn by hand with her father before she went to school. She and her brother Don swore that when they grew up they wouldn’t be cold or hungry again. Upon graduating high school she worked at Frank’s Cafe and then Bjornstad Drug for 4 years where her future mother-in-law said “I want you to meet my son when he is home on leave.” They met and fell in love in December of 1942. Ruth then rode a train, alone, from Iowa to Pyote, Texas to marry Bob Barnard where he was stationed with the Air Force. They married on his birthday November 7, 1943.

After the war Ruth and Bob worked his Uncle George’s farm in the ‘40s for 4 years near Gillett Grove and then moved to Monahans, Texas in 1951 where she worked as a long lines operator for Southern Bell while Bob was a roustabout in the oil fields. Later they moved to St. Louis and together worked for Wagner Electric until 1954 when they adopted a baby girl and returned to Iowa. Ruth was a stay at home mom for the first couple of years in Petersen. In 1959 they moved to Spencer; she got a job at Stub’s Ranch Kitchen as a waitress, then at Nelson’s Children Shop and Women’s Shop as a sales clerk. In 1967, they moved to Hartley where she worked at the Hartley Drugstore. After their daughter graduated high school Bob and Ruth headed west to Fort Collins, Colorado, where she worked for Forney’s Factory in the shipping department. They retired back to Spirit Lake in 1980. She worked at Billie’s Dress Shop and began modeling at their summer fashion shows. She modeled her wedding gown when she was in her ‘70s.

Ruth liked baking apple pies and butterscotch bars. After work she would come home and wash the floors, clean house, bake and put her hair up in rollers. She slept in them so she would look nice at work the next day or at church. Before bed she’d have a cup of coffee and put her feet up and read the newspaper. In their ‘60s she and Bob began working at the Clay County Fair and for the next fifteen years sold tickets at the east entrance. They both loved talking with people. In 1938, when she was a waitress at Frank’s Cafe she “waited on a giant.” The world’s tallest man, Robert Wadlow, was part of the Clay County Fair, “he came to the cafe, ate two chickens and gave a big tip”. No wonder she loved the fair and visited the fair on September 10, 2019, one last time at age 99. She loved to drink coffee and the color green. She was proud to be 100% Dane. She practiced chair and laughter yoga the last nine years of her life.

Ruth and Bob loved to dance to big band music of the ‘40s and would often dance at the Roof Garden and other dance halls throughout their lives. They kept on dancing until Bob got Parkinson’s. Ruth kept him at home, taking care of him for 13 years. The last 7 months of his life were spent at Hilltop Care Center where she visited him every day.

Ruth is survived by her daughter, Martha Helen Barnard, her son-in-law Chad Branham, her sister Naomi Adams and Naomi’s children Ned Adams and Jean Ferneding as well as some cousins and many nieces and nephews. She was preceded in death by her beloved husband Robert K. Barnard, her parents Henry and Martha Jespersen, her brothers Don and Wesley Jespersen and sister Eunice Binder.

The urn with her ashes will be placed next to her husband’s in the columbarium at St. Albans Episcopal church on November 7, 2019, their 76th wedding anniversary so she can be with her husband once again.