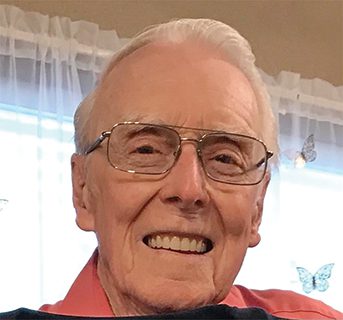 Per his wishes, Mick was cremated and inurned at the Rock Island Arsenal National Cemetery in Rock Island, Illinois. A Celebration of Life Open House will take place on Saturday, September 24, from 1:00 to 4:00pm, with a brief time of remembrance at 2:00pm, in the Milford Community Building (806 N. Avenue, Milford, IA, 51351). In lieu of flowers, the family requests donations be made to the charity of the donor’s choosing.

Michael Lorrain Noteboom was born September 27, 1929, to Michael and Lillian Husman Noteboom in Brandt, South Dakota. The family moved to the Canton, South Dakota, area where Mick attended school and graduated from high school in May of 1947. After working in the construction industry for a few years he joined the United States Marine Corps on December 26, 1950. He taught a radio technicians course and attained the rank of Staff Sergeant before being discharged in December 1953. On May 23, 1954, he married Ceceile Birchard Watrous who brought two children, Evon Marie and Karla Kay to the marriage. Together they had a son, Michael William (Mick Jr.). They later divorced. On May 31, 1975, he married Karleen Westberg Tingle who brought three children to the marriage, Shara Lynne, Kyle Lee and Dawn Marie. They raised their four children together. After his time in the military, Mick returned to working in the construction business and remained in the industry throughout his career. He worked as a bricklayer before becoming a general contractor. After he retired in 2008, he organized, planned, and supervised the renovation of the storefronts in downtown Milford, Iowa. His handiwork and craftsmanship will leave a legacy on the Lakes region for years to come. Outside of his career, Mick enjoyed riding his Harley Davidson motorcycle, gardening, cooking, reading, and spending time with his family, especially his grandchildren. Mick was an active member of his community, serving on the Milford City council and as a member of the American Legion Post #384 in Milford. He was also a member of the Northwest Iowa Home Builders Association as well as the Iowa Great Lakes Ministry board and served as an Ambassador for KJIA Christian radio. He played an active role in any church he attended, teaching Sunday School and leading Bible studies. During his time at Faith Community Church, formerly Union Memorial Church, in Milford, where he was a member, Mick led a Bible Study at Stonebridge Assisted Living. Regardless of where he lived, Mick always found a way to give back to his community.

He was preceded in death by his parents, brothers Edwin and Verdell; sisters Jeanette, Nelvyna, Darleen, and Marynel; stepdaughters Evon Loontjer and Karla Lind and son-in-law Gary Lind.