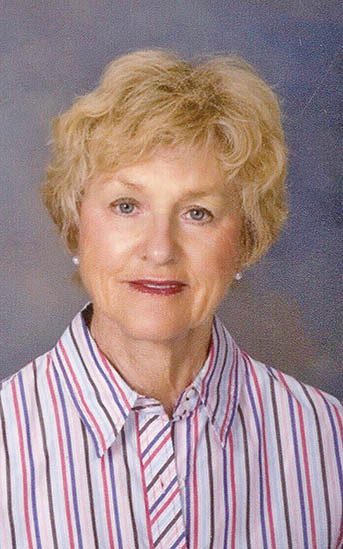 Marjorie Ellen (Oberhokamp) Boeke was born on November 17, 1937, to parents who immigrated to the U.S. from Germany. She lived in Radcliffe, Iowa, with her six siblings, and spoke fondly of growing up on a farm—the porch swing, barn raisings, chasing chickens for dinner, fresh pies. She spoke of the long walk to her country school, which felt even longer on frigid, winter days. In high school, Marge became the star of the girls’ basketball team, taking them to state, and was voted Outstanding Forward on the all-state conference team.

At age 19, Marge married her high school sweetheart, Thomas Henry Boeke of Hubbard, Iowa. They moved to Iowa City, and later Memphis, before settling in Spirit Lake, Iowa, where Tom practiced optometry and they raised their three children.

Marge was an avid runner, biker, and tennis player, and loved exercising before dawn. She liked to keep busy and moving and remained competitive, entering several 5K and 10K races in the lakes area, and routinely beating her husband in tennis.

A loyal Hawkeye fan, Marge rarely missed home football or televised basketball games. But the big draw to Iowa City was her four grandchildren, who all resided there. She attended many of their birthdays, sporting events, and school performances.

Marge had a knack for decorating and making everything she touched more beautiful. Her home was transformed for each holiday. Her grandchildren fondly recall Christmases at Grandma’s with a tree in every room and plates of assorted Christmas cookies, fifteen or more varieties, all homemade, some handed down German recipes.
Singing in the church choir was one of her favorite pastimes. She rarely missed a Sunday. If she thought a parishioner was lonely, Mom would pay them a visit, bearing something homemade. At Christmas, she delivered many cookie plates.

After her three children were grown, Marge cared for the children of two different local Spirit Lake families. These kids filled her life with so much joy as she watched them grow and move away. Before Alzheimer’s, she knew where each of these kids lived, and if they’d moved, married or had kids of their own.