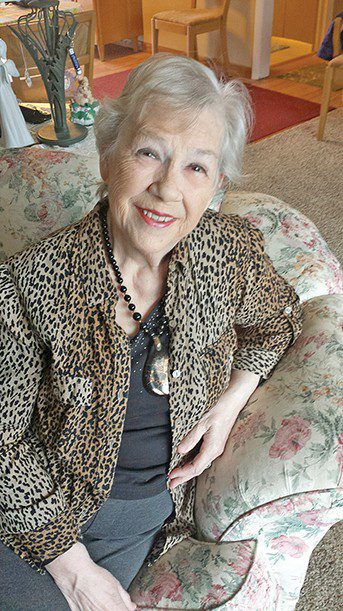 Lois Elaine Wonder Krayenhagen was born on September 12,1937, to Paul and Mildred (Petit) Wonder in Battle Creek, Iowa. She was baptized in the First Presbyterian church and graduated from Battle Creek High in 1955. Some of her fondest memories were of growing up in Battle Creek surrounded by her many cousins which were her dearest friends. After high school she attended a secretarial college in Omaha, Nebraska.  She married Marlin (Mike) Krayenhagen in 1957. They raised their three children David, Kathy, and Peggy on a farm west of Schleswig.

In 1988 Lois moved to Okoboji. She worked at the Inn, followed by a job at Cutty’s. In the early ’90s she and her sister started a gift shop called “Lo-Sandi” at the Stables in Okoboji. Lois then moved the gift shop to Queen’s Court in Arnolds Park and named it Park Place Gifts. From there she spent several years at the front desk at Super 8 followed by many years at Walmart. Customers enjoyed Lois’s happy spirit and would choose her checkout line. She retired due to poor eyesight. She loved all of her jobs and was a dedicated employee.

Lois loved to shower her grandkids with little gifts (often from her gift shop or Walmart!).

Lois took pride in her Spirit Lake home and loved living close to her daughters and grandchildren.

In 2018 she moved to Keelson Harbour Memory Care in Spirit Lake where she was loved by her caregivers and was a model resident. On March 25, 2020, she suffered a stroke.

Lois passed away on May 9, 2020, at Accura Health Care in Spirit Lake.

Lois was preceded in death by her parents Paul and Mildred Wonder; her son David, her sister Sandra Bertelsen DeGroot; and her brother and sister-in-law Ron and Rose Wonder.

Memorials may be given in Lois’s name to Respite Angels or St. Alban’s Episcopal Church.

Schuchert- Lentz Funeral Home is in charge of the arrangements.