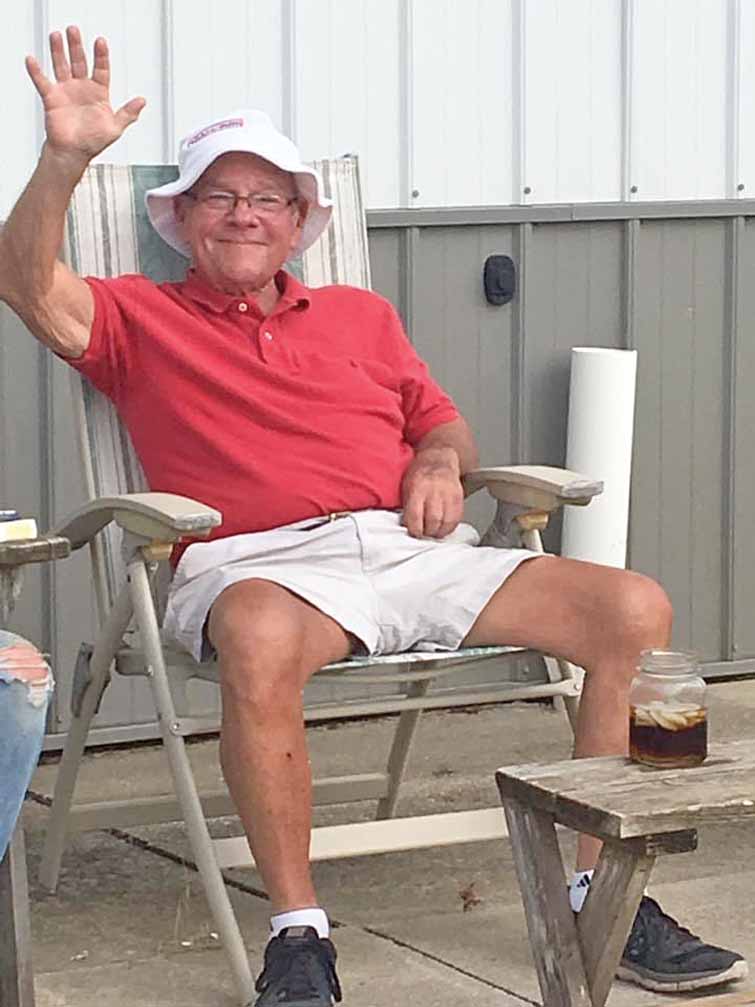 John Mather Hinn, beloved husband, father and generous businessman, died on February 26, 2021 after a long, hard-fought battle with cancer. John’s passion for life was evident from the very beginning of his life. The son of Robert “Maurice” and Irma Lucille Hinn, John was born in his family’s home in Laurens on September 13, 1942. With the love and patience of his mother and aunt Larie Wells, he was deemed healthy after just a few months. He is survived by his sister Marney Hinn Norman.

John knew a good thing when he saw it. He often told the story of his “love at first sight” moment with his soulmate, Kathleen. While John was attending Buena Vista College, he was also managing the Super Valu store in Laurens. It was there that he saw Kathleen Mefferd and decided he absolutely had to go out with her. Kathi and John were married after just 6 months of dating, on June 12, 1966, and they celebrated their 54th anniversary in 2020. John was so proud of Kathi that he had a T-shirt made with her picture on the front and he wore it proudly at one of the family’s legendary 4th of July pool parties.

Nothing made John happier than his family and friends. John had a gift for making everyone feel special with his trademark smile and big hugs. John and Kathi built their home on the lake to accommodate the non-stop parade of people who stopped by each day, including his many nieces and nephews who always dropped by to see their favorite uncle. He cherished his time on the lake, especially in the summer. John always said there were just 69 beautiful, warm days a year and he refused to leave the lake during that season. John’s passion for his spot on the lake was also due to his need to care for his “Secret Garden” situated on over an acre of his backyard. He loved growing vegetables and sharing them. He was especially fond of growing hot peppers. John’s homemade salsa and hot pepper jellies had a large fan following across the U.S. Later in life, John looked forward to his timely afternoon meetings and fellowship with local friends at “The Shop”.

When John did agree to leave the lake, he would go to his favorite retreat- Saskatchewan, Canada. He visited there twice a year to hunt and fish with his son, Rob, good friends, and cousins. After his High School graduation, John took some time off and traveled with his parents through Mexico. And, he continued to travel to Mexico every winter with his family and his best friend, Duane Mueske and his family.

While John liked to have fun, he was also a man of business. He graduated from Buena Vista College in May 1967. John and Kathi purchased their first cabin in the Iowa Great Lakes in 1969 and moved to the Lakes area permanently in 1974. John owned and operated the Hinn’s Super Valu Stores in Laurens and Estherville, which he purchased in 1974. He continued operating them until 1978 (Laurens) & 1980 (Estherville). John started in real estate in 1979 at the Orville Carlson Agency. In 1980, he and Kathi left there and with another couple, started a firm called Town Lakeshore Country Realty. They had an opportunity in 1983 to purchase another Firm in Spirit Lake, Iowa, and not have any partners. They purchased the Fred Dowden Agency and renamed it DOWDEN-HINN REALTORS on January 1, 1983. It is there that two of their children and their daughter-in-law are REALTORS. Their oldest daughter, Gretchen, is a real estate agent with Keller Williams in New Jersey. The Dowden Agency was started in 1918, and at 102 years old, DHR is one of the oldest continuous run Real Estate Offices in the State of Iowa. John’s vision for the next 100 years had them join the Keller Williams Franchise which will enable them to expand into additional markets.

From his earliest days in business, John was committed to giving back and helping people. From the very beginning of his career, John treated those who worked for him like family. He mentored the carryout boys who worked for him in the grocery stores and bought one of them a suit for graduation so he could be like everyone else. In 2020, John was named Citizen of the Years by the Spirit Lake Noon Kiwanis, and in an interview about the honor John said “I’ve always felt it necessary to take care of the children of the county. Anything that involves a child, I’m for and will help.” And while John and Kathi have been generous to a myriad of organizations throughout their lives, they almost always did so anonymously. They believe that people are meant to help each other, and the stories of their hidden generosity are widespread.

John will be remembered by his children as a generous, loving father who inspired and guided them. He showed them the importance of living a joy-filled, purpose-driven life. He leaves to mourn his wife, Kathleen, daughter Gretchen (Anthony) Lucy of Tenafly, NJ; son Rob (Angela Bousquet) Callan, Cade, Sophie, Gracie, and Max; and daughter Angela (Eric) Alex, Zac, Oliver and Gus; his sister Marney Norman; numerous nieces and nephews. He was preceded in death by daughter, Heidi Larie, his parents Morrie and Irma Hinn.

A Celebration of Life will be held this summer. (Date TBD)

In lieu of flowers, the family requests donations are made to: Camp Foster, the YMCA, Spirit Lake, Iowa.

Warner Funeral Home in Spencer is in charge of the arrangements.