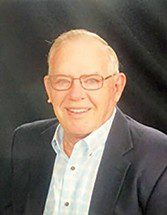 John G. Ney, age 83, of Arnolds Park, Iowa, passed away on Wednesday, October 14, 2020, at Avera McKennan Hospital in Sioux Falls, South Dakota. His funeral mass was held on Saturday, October 24, at St. Joseph Catholic Church in Milford with Father Tim Johnson officiating. Burial was at Calvary Cemetery in Primghar. Arrangements are under the care of the Eldridge Family Funeral Home in Primghar. Online condolences can be sent to eldridgefamilyfuneralhomes.com.

John Glen Ney,the son of Anthony and Evelyn (Mousel) Ney,was born January 25, 1937, in Primghar, Iowa. He attended school in Primghar and graduated from Primghar High School. He enlisted in the service and served his country for two years. He returned to Primghar and began his farming career. He was united in marriage to Shirley Ann Sampson on February 12, 1958. John worked hard farming, milking cows, raising hogs and driving truck to provide for his family. He helped on the corn sheller crew and later had his own portable grain dryer and did custom drying for neighbors. When his family grew to four children; he taught them all to work hard walking beans in the morning, afternoon and sometimes in the evening “for a couple of rounds”. He retired from farming and John and Shirley moved to Arnolds Park to make their home. He passed away on Wednesday, October 14, 2020,at the Avera-McKennan Hospital in Sioux Falls reaching the age of 83 years, 8 months and 19 days.

He was a former member of St. Anthony’s Catholic Church in Primghar and currently attended St. Joseph’s Catholic Church in Milford. John enjoyed the farm, taking his family and their friends boating, water skiing and fishing. In the winter he loved to ice fish and enjoyed many family snowmobiling trips to Yellowstone and the Black Hills. He loved his family and would do anything for them as he cherished his children, grandchildren and his great-grandchildren. He was the king of the grill for all family gatherings and especially loved doing a fish fry. His heart and home were open to everyone and his face would light up with a big “Hello” to all who entered. He was well known and loved as Johnny, Johnny Cakes, Winterhawk, Papa, Dad, Cakesters, Cookie Monster, Grandpa, Gramps and Grumpa.

John is survived by his wife of 62 years Shirley of Arnolds Park, Iowa; his children Kelly (Beth) Ney of Primghar, Iowa; Kirk (Robin) Ney of Omaha, Nebraska; Roxann (Paul) Rutt of Burnsville, Minnesota; and Renee (Kevin) Rier of Mason City, Iowa; his beloved grandchildren, Sarah (Leif) Jeppson, Zachary and Abigail Ney,Laura and Kayla Ney,Erik and Blake Rutt,A.J., Alex and Jacqueline Rier; his beloved great-grandchildren, Taten and Haven Jeppson,George Steehlinger, who was like a son to him; two sisters,Mary (Al) Bofenkamp and Susan Hill,both of Cherokee, Iowa,and other relatives and many friends.

He was preceded in death by his parents;two sisters, Flora Jean Ney and Linda Ney Hughes;and a nephew, Brian Bofenkamp.