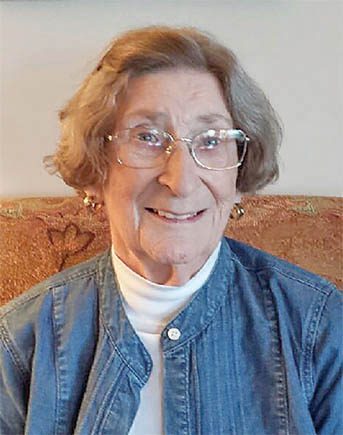 Jean Waters Hardie, 91, born July 16, 1929, passed away November 17, 2020, at her home in Spirit Lake. She spent her early life in Lake City, Sheldon, and Moville, Iowa, and moved to Sioux City in junior high. She graduated from East High School in 1947. She worked at T.S. Martin Department Store then worked at Northwestern Bell Telephone Company first as an operator, then as a multi-state instructor. She married Jack Hardie November 8, 1958, and they became parents to Jill (Uland) of Raymore, Missouri, and Sara (Dann) of Minneapolis, Minnesota; grandparents to Emily (Uland) Beemer of Warrensburg, Missouri; great grandparents to Henry and Jack.
She was an active mother and involved in many community activities. She later returned to work in retail, then worked as a manager of the Dislocated Workers Program at Western Iowa Technical College in Sioux City, Iowa, until retirement in 1990. She and Jack then moved to the Lakes area to spend their retirement years where she was active at the Pearson Lakes Art Center, bridge, and other various organizations.

She enjoyed bridge and mahjongg and having good laughs with friends and family. She is survived by her husband Jack, daughters Jill and Sara, granddaughter Emily and husband Jeramy (Beemer), and great grandchildren Henry and Jack, niece and husband Barb and Paul Hunt, and nephew and wife Scott and Nicki Davison.  She was preceded in death by her parents Earl and Eva Waters, her sister and brother-in-law, Joan, and Joseph Davison.

A graveside service will be at held at the Kingsley Cemetery in Kingsley, IA on Friday, December 4, 2020, at 1:00pm. In case of inclement weather that day, a small service will be held at the First Lutheran Church in Milford, Iowa. The Schuchert-Lentz Funeral Home in Spirit Lake is assisting the family. Online condolences may be sent to www.spiritlakefuneralhome.com.