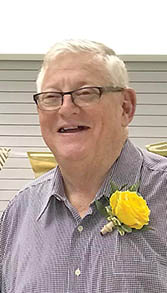 James Bonsall Jr., 72, of Spirit Lake, passed away at Lakes Regional Healthcare on December 10, 2020. Services will be held at the Schuchert-Lentz Funeral home Tuesday, December 15, 2020, at 10:30am. Military Funeral Honors will be provided by American Legion Timpe Post #23 and the John W Kidd VFW Post #4514 of Spirit Lake. A visitation will be held Monday from 5-7 at the funeral home. Burial will take place in the Lakeview Cemetery in Spirit Lake. Arrangements are under the direction of Schuchert-Lentz Funeral home in Spirit Lake. Online condolences may be left at www.spiritlakefuneralhome.com.

James Elliott Bonsall Jr. was born January 9, 1948, in Spirit Lake, Iowa,to James and Ruth (Jones) Bonsall. He graduated from Spirit Lake High School in 1967 and attended Iowa Lakes for 2 years earning his Associates degree. On June 21, 1967,James enlisted in the United States Air Force and serviced his country for 25 years. James married Denise Lambert at the Methodist Church in Spirit Lake on October 22, 1969.

James worked many jobs but most recently for the City of Spirit Lake up until his retirement. He was a member of the Spirit Lake United Methodist Church, and the American Legion Timpe Post #23. In his free time, he loved to fish, read western novels, and go to garage sales and flea markets. James would take vacation every year to work the Clay County Fair and would share many unforgettable stories about his time there with family and friends. In his youth,James was active in the Boy Scouts and obtained the rank of Eagle Scout and Order of the Arrow.