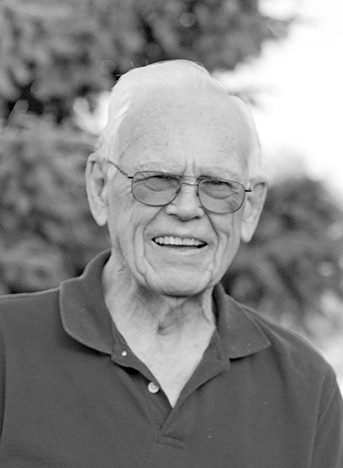 Homer D. Strampe passed on to his eternal life in the early hours of March 31, 2020, in Spirit Lake, Iowa, at the age of 94 years, following a courageous struggle with sarcoma.

Homer Dudley Strampe was born on November 20, 1925, to Bernard and Helen Idso Strampe in Paullina, Iowa. Homer attended school in Paullina and graduated in 1943. He was active in sports and worked in a grocery store from the age of eight.

Following high school, Homer enlisted in the U.S. Navy. As part of his enlistment, he attended college for two semesters at the University of Dubuque and then went to Lawrence College in Appleton, Wisconsin. Following boot camp at the Great Lakes Naval Training Center in Chicago, he was assigned to the destroyer, USS Erben, in the Pacific Theater. He was honorably discharged in June of 1946 and then returned to Paullina.

Homer spent his adult life in the grocery business. He owned his own small grocery store, Homer’s Market, for a short time in Paullina, Iowa. After 33 years as a driver salesman with Scrivner (formerly M & JR Hakes), a wholesale grocery firm in Laurens, IA, he retired in 1987. In retirement, Homer and Harriet divided their time between their summer cottage in Spirit Lake, Iowa and their winter home in Fort Myers, Florida. Homer was a caring neighbor who was always willing to help fix things, provide transportation or drop in for a visit.

Homer was active in the Masonic Lodge, Eastern Star, VFW and the American Legion. He loved to fish and to spend time with friends and family.

He was preceded in death by his parents; his wife, Harriet; his brother, Palmer (Pink) Strampe; his sister, Donna Rotzler; and infant grandson, Greg Heetland.

The family would like to thank the staff at Wel-Life Assisted Living and Kindred Hospice for their dedicated care during Homer’s last months. According to his wishes, his remains have been cremated. A memorial service will be held at a later date.