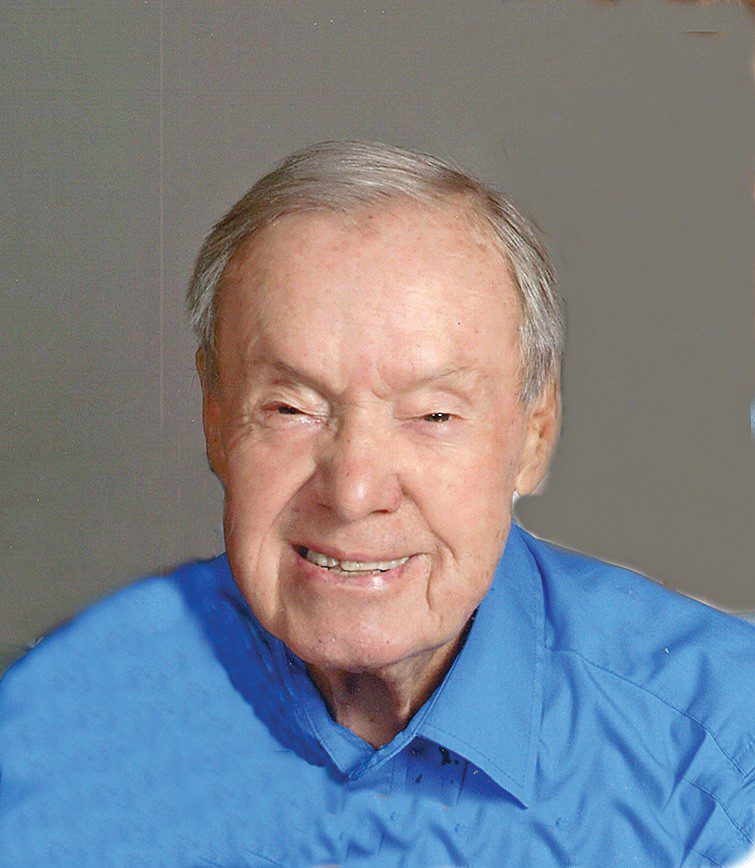 Grady Parham, 91, a resident of 2702 Sunner Avenue in Spirit Lake, passed away Saturday February 23, 2019, at the Accura Nursing Home in Spirit Lake. Born Grady Joseph Parham on February 5, 1928, in Louisville, Kentucky, to Henry Grady Parham of Georgia and Adeline Catherine (Snyder) Parham of Kentucky. Grady graduated in 1946 from St. Xavier High School in Louisville and received his BS in Marketing from the University of Louisville in 1954.

Ever ambitious, Grady juggled college studies and work as a Personnel Manager at Fehr Brewery. His studies were interrupted as the Korean War heated up and he was drafted by the US Army in 1950. He was stationed in Germany and served honorably from September 1950 to August 1952 where he rose to the rank of Corporal. After serving his country, he returned to Louisville to finish college on the GI Bill, also working as a Personnel Director for Kosmos Cement.

On April 28, 1956, Grady married the love of his life, Joyce Marie Wiseman, from Louisville, Kentucky. Together they raised four children: John Thayne, Thomas Grady, David Quinn, and Mary Tenley. Soon after marriage, Grady began what would be a career-long involvement in the cordage and sporting goods industry. First as a National Sales Manager with Puritan Cordage Mills in Athens, Georgia, where he and Joyce moved and built a home for their growing family. At Puritan, his contributions paid off handsomely and he was promoted to Vice President and transferred back to Kentucky where the family lived for over 20 years.

At age 43, Grady continued the next phase of his career by joining Berkley Sporting Goods – first in Louisville, Kentucky, in 1971 and eventually moving in 1978 to the corporate headquarters in Spirit Lake, Iowa. At Berkley, Grady held the title of Eastern Sales Manager US, which later included overseeing sales in Mexico, Canada and Europe, until his retirement in 1993.

In Spirit Lake, Grady was dedicated to career success but always enjoyed keeping busy outside of work and volunteered extensively. As a member of Sunrise Kiwanis, Grady helped to plan and set up four playgrounds in the Spirit Lake area. For local nursing home Hilltop Civic Group (now Accura), he helped patients to pay bills, manage money and with their shopping needs. He was instrumental in getting community support for the beautification of Spirit Lake’s Hill Avenue and played a lead role in Make a Difference Day. He volunteered at Upper Des Moines to help distribute goods to the needy. Grady worked and volunteered extensively for MainSail, and along with other civic leaders, Grady played a part in the reconstruction of the infrastructure and planning of the new City Center and Courthouse on Main Street. In 2017 he was presented an award in “Recognition for Outstanding Dedication and Exemplary Leadership” from the Spirit Lake Chamber of Commerce. He was also a longtime member of the Knights of Columbus and a devout member of St. Mary’s Catholic Church in Spirit Lake.

After retirement, Grady and Joyce relished the Spirit Lake lifestyle, enjoying golf, card games, water sports, dinners and countless get-togethers with family and friends. Like many ‘snowbirds,’ they also traveled winters to enjoy a community of new friends in Lake Havasu, Arizona, and Lake Oconee, Georgia. Grady had a deep regard for community and people. Wherever he called home, he always sought ways to volunteer and help. Whether coaching basketball or baseball in Louisville, or as board member of the Boys Club and the Kiwanis, or President of the Board of Directors of the Jaycees, in Athens, Georgia.

To his family, Grady was known for his humor, lightheartedness, and joy of life. His kids grew up in a home filled with the voice of his beloved Tony Bennett, 16mm movies projected on a sheet in the basement, train sets, treehouses, croquet and table tennis tournaments, as well as countless vacations and celebrations. Grady worked hard to make life wonderful and to see his family comfortable and having fun.

A memorial service for friends and family will be announced later this summer in Spirit Lake.

Grady Parham was a husband, dad, grandfather, father-in-law, and friend. An example to all, Grady was good-hearted, honest, and moral. He treated everyone fairly, and was always ready to help someone in need. Loved and admired, if you ask anybody about Grady Parham, they’ll tell you he’s the nicest guy they ever met, and above all – a real class act.