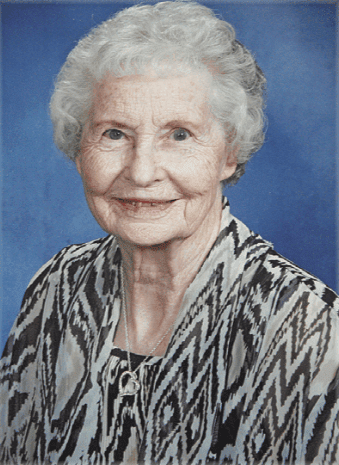 Gertrude Greenfield Hibma was born on February 20, 1925, in Bigelow, Minnesota. She was the daughter of Cornelius and Grace (Rutgers) Runia. She lived her youth in Bigelow, Minnesota, and Ocheyedan, Iowa. She attended Western Christian High School in Hull, Iowa, graduating in 1942. She was united in marriage to William Greenfield of Sibley, on March 27, 1946 in Leighton. They farmed near Cloverdale, until 1981. William passed away on August 24, 1981. She was united in marriage to Elmer Hibma on January 15, 1983. They lived on a farm in Harris, until 1996, when they moved to Spirit Lake. Elmer passed away on July 29, 2001.
Gertrude enjoyed traveling to Israel, Russia, Greece, Turkey, Germany, Switzerland, Austria, Alaska, Hawaii and the Netherlands. She loved flowers, flower gardening and keeping memories alive in pictures (many pictures).

Gertrude was a member of the Christian Reformed Church in Ocheyedan and attended the Good News Church in Spirit Lake. She participated in Bible Studies, a quilting group for missions, and was a faithful Crossroads Prison Ministries mentor for over 15 years. She was a member of the Federation of Women’s Club (Keeping Up Club). She passed away on Thursday, March 29, 2018, at Lakes Regional Healthcare in Spirit Lake.

The Andringa Funeral Home of Sibley and Ocheyedan in charge of arrangements for Gertrude Greenfield Hibma. Online Expressions of Sympathy can be sent to www.andringafuneralhome.com