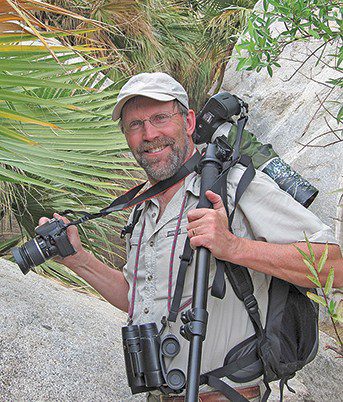 Gary Fredricks – The world lost a passionate advocate of natural resources on July 20, 2020 with the passing of Gary Fredricks at his home in Washougal, Washington.

Gary Lee Fredricks was born June 25, 1955 in Sioux Rapids, Iowa to Verlin and Delores (Bappe) Fredricks. He was baptized and confirmed at Grace Lutheran Church in Marathon. From a very young age, he learned all he could about nature (especially birds), inspired in part by his maternal grandmother, Alice Bappe. As a son of a farmer, he developed skills that would serve him well throughout his life and he was well known for his abilities to fix nearly anything. He graduated from Marathon High School in 1974, having played football and spending as much time as possible hunting, trapping and fishing.

He furthered his education at Iowa Lakes Community College, before going on to Iowa State University, graduating in 1980 with a bachelor’s degree in Wildlife and Fisheries Biology. Early in his career, he worked seasonally for the Iowa Conservation Commission at parks around the Iowa Lakes region, and as a conservationist for the Lyon County Conservation Board.

Gary met the love of his life, Nancy Ross, in a botany class at Iowa State University. They were married on July 15, 1978 in Clinton, Iowa. For 42 years, he was her devoted husband and best friend, travel companion and rock.

Gary and Nancy moved to Oregon in November 1980 and since that time have lived in the Pacific Northwest. Gary worked as a fisheries management biologist for the National Marine Fisheries Service, the federal agency entrusted with managing living marine resources in the United States. For over 35 years, he worked tirelessly on conservation issues, especially the restoration of salmon runs on the main stem of the Columbia River.

Gary was a self-sufficient, independent man who hunted, gathered mushrooms, and with his wife grew their own food in their half-acre garden and orchard. Uncommonly successful at elk hunting, he fed family and friends with a total of 17 elk over his lifetime, from Diamond Peak and Indian Heaven Wilderness areas in Oregon and Washington.

He was a lifelong avid birder and an accomplished wildlife and nature photographer. Trained early in the importance of field notes, he maintained detailed journals, documenting his experiences of the natural world in his travels across North America. In his pursuit of birds, he had a biogeographical trap-line of places across the continent he visited annually, accumulating a bird life list of 724 species within the United States and Canada. Always generous with his knowledge, he inspired others with his passion for birds and nature photography.

Although he lived in the Pacific Northwest for 40 years, he considered Iowa home. Visiting family was always a priority. In spite of compromised health, he traveled up until the end, returning from his last road trip only ten days before he died. He truly lived his life to the fullest.

Gary was a humble man of the highest integrity, respected by all who had the great fortune to know him. He will live on in the hearts of those who loved him.

To honor his commitment to Iowa conservation and education, please consider a donation to Lakeside Laboratory (iowalakesidelab.org) in Gary’s memory. A tribute monument will be placed in Poland Township Cemetery, Marathon, Iowa, near the family farm. A Celebration of Life will be held at a later date.