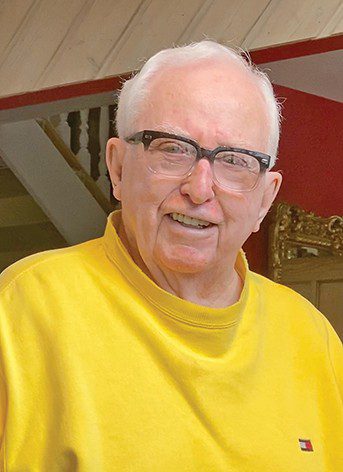 Frederick Reed Dowden, 89, of Spirit Lake, died at home on December 22, 2020. Born to Frederick Rufus and Bessie Elva (Reed) Dowden on October 4, 1931, at the family home on 16th Street, Fred spent nearly all his life in Spirit Lake, a place he loved dearly. Fred (aka Freddie, Snug, Unc) graduated from Spirit Lake High School with the Class of 1950. For three years he attended the University of South Dakota before being drafted into the Army. After his discharge in 1955, he went on to earn a degree in business and commerce from the University of Iowa.

Fred had earlier – in the summer of 1952 – fallen in love with Diane Corl. A blonde beauty from Atlantic, Iowa, Diane worked as a carhop at Red’s, a drive-in at Arnolds Park. The two married in 1953, and three years later their daughter Robin was born. When Fred completed his degree at the University of Iowa, his father (Fred Sr.), who had been diagnosed with a terminal illness, asked his namesake to return to Spirit Lake. Fred obliged, eventually purchasing the real estate and insurance agency that his father had founded in 1918.

A successful entrepreneur, Fred was associated with a long list of business dealings in the Lakes Region. He helped found Lakes Development in the 1960s, which developed property on US-71 (extending from today’s Indian Motorcycles to Cenla Campground) as well as properties in Milford. He was a leader of Spirit Lake Industries, the one-time owner of Brooks Golf Course and the old Holiday Inn, Arnolds Park Amusement Park (which Fred operated from 1969-1987), Style Craft Furniture, Great Lakes Mall, Center Lake Village, hotels in Des Moines and Illinois, and more. Locally, he built the apartment house north of the Spirit Lake Post Office, and the former Dowden-Hinn Realtors office building on Highway 71 (if the building is brick and has white, colonial-style trim, Fred likely had a hand in it). He was hard-working, civic-minded and enjoyed seeing others capitalize on opportunities. He loathed government debt, and his aim was to have the Dickinson County Taxpayer’s Association flourish. In a 1989 Okoboji Magazine profile, he spoke of ridding local communities of dividedness: “I’d like to see people of all the communities work together. The goal is the same for all of us. We want to have the best retailers, the best service, etc. When my neighbor prospers, I prosper.”

An avid hunter and fisherman, Fred cultivated a passion for the outdoors from early on, encouraged in particular by his sister Nell’s husband, Lawrence. Fred spent summers working at the couple’s fishing resort at Lake Cochrane, South Dakota. As a junior in high school he wrote to Nell, “I don’t know what I’m going to do. I have such a hard time waiting for everything. Every time I look at my fly rod, I want to go fishing so bad it’s just pathetic.”

Fred considered an Iowa cornfield the prettiest site ever, but it was the wheat fields and prairies of Saskatchewan that called to him each autumn. As a 16-year-old, he had gone with his father to Canada to help with the harvest on land Fred Sr. had acquired in the 1930s from a traveling salesman in need of a new car. Lake Lenore in Saskatchewan would become Fred’s second home. He and his friends, including his childhood hunting buddy Dave Dean, would travel there every October from 1956 to 2019, stalking birds in the fields and marshes.

An only son born to older parents, Fred had three sisters, and the youngest of those was 17 years older than Fred. Fred relished the role of youthful family patriarch to a clan of mostly women. He was a loving brother, caring uncle, devoted husband and father.

The last day of Fred’s life was a good one. He took his customary drive around Big Spirit Lake – his daily commune with god and nature – and stopped at Lakeview Cemetery to say good morning to Diane, who had passed away years earlier. Back home he welcomed the arrivals of Donna Johnson, his partner of the last decade, and later that day, his daughter Robin. The three visited, discussed their Christmas plans, steered clear of politics, and enjoyed dinner together. Fred’s heart failed an hour later as he was getting into bed. A master card player, he could not have played a better hand. It was a remarkable ending to an exceptionally well-lived life.

Fred is survived by his daughter Robin Dowden of Corning, NY; his partner Donna Johnson of Lakeville, MN; Donnie Johnson of Spirit Lake, who was like a son to Fred; and four nieces and a nephew. His wife and three sisters predeceased him.

There will be a service in celebration of Fred’s life this summer, or when safety permits. Memorial contributions can be made to Ducks Unlimited or the University of Okoboji Foundation.

Arrangements are under the direction of the Schuchert-Lentz Funeral Home in Spirit Lake. Online condolences may be left at www.spriritlakefuneralhome.com.