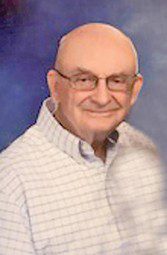 Edward Leo Wollner, son of John and Della (Deneen) Wollner, was born December 30, 1919, in Emmetsburg, Iowa. He grew up in Emmetsburg attending St. Mary’s Catholic School where he graduated in 1937. Following high school, he began a lifelong career of farming. It was interrupted by WWII where he served in the European theatre as part of the John Deere battalion. He retired from farming in 1995.

On January 17, 1950, Edward was united in marriage to Marjorie Mehan at Assumption Catholic Church in Emmetsburg. To this union two children were born.

Ed’s faith was central to him throughout his entire life. He was active in his church community and served on the church board. He also served on the Dickinson County Conservation Board for twenty three years, and the Terril Coop Board. He was a lifetime member of the American Legion in Terril where he served as Commander, and also a lifetime member of the V.F.W. Post #2295 in Emmetsburg.

During the football season, Ed supported the “Fighting Irish” by being an avid Notre Dame fan.

The family requests that memorials be given to Terril American Legion. Arrangements by Martin-Mattice Funeral Home. martinmatticefuneralhome.com