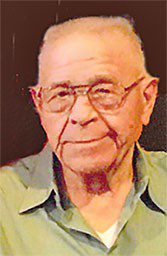 Memorial services for David “Bud” McClure, age 89, of Lake Park, were held on Wednesday, August 11, 2021, at the First Presbyterian Church in Lake Park. Burial was in the Silver Lake Cemetery in Lake Park.

David Hiram (Bud) McClure was born May 19, 1932, in Lake Park, Iowa, to David and Tillie (Ritterholz) McClure. There he grew up and graduated from high school in 1950. He enlisted in the Air Force and served in the Korean War.

On February 7, 1954, Bud was united in marriage to Betty Rush at the Methodist Church in Montgomery, Iowa. They lived in Madison, WI briefly while he finished his time in the service. They then settled on a farm in Sioux Valley, MN where they were dairy and crop farmers. Bud also custom combined for several years.

In the spring of 2007 they moved to Lake Park. Bud loved to watch things grow and had an extensive garden and many houseplants. He generously shared his produce and houseplants with family and friends. He was very proud and supportive of his family and enjoyed attending the many activities of his children, grandchildren, and great-grandchildren over the years.