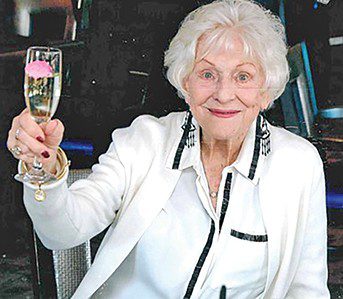 Catherine Kay Jaedicke Allen died peacefully at the age of 91 in Overland Park, Kansas. Kay was born on November 13, 1928 in Lawrence, KS to Nellie Nissen Jaedicke and Fritz Jaedicke. As a child of the Great Depression, (which she never thought was all that great) she learned to be tenacious, resourceful and frugal. Kay graduated from Wichita East High School and married Max Allen. She raised four children and learned to be resilient, gregarious and determined after moving over 20 times throughout the United States during Max’s career with Boeing.
Catherine worked many years in various schools in both Washington and California always knowing what tricks her children were up to at school. She bloomed later in life following her divorce working for Senator Bob Dole on his presidential campaign. Kay then became a guide for Cartan Travel and later, finally found her niche in sales as the top producer for Aetna for several years in financial planning.
Upon retirement, she purchased a yacht and named it “Catalina”. She obtained her captain’s license and began her life at sea boating the waterways from Florida to New York and back for several years.

Later in life, Kay was referred to as “GiGi” (Grandma Great). Gigi never met a stranger and welcomed everyone with her radiant smile. She made an endless amount of friends throughout her life’s journey with her positive outlook on the world. She knew how to liven up a party and always displayed her sartorial flair with a closet full of special hats and costumes for any and all holidays and occasions. Her love for animal prints was passed down to her daughters.

A devoted fan of the Kansas City Chiefs and the KU Jayhawks, Kay never missed a game. Kay also enjoyed lake life with her daughters at Lake of the Ozarks and Lake Okoboji. You may remember Kay and her cameos at daughter Wicker’s “Gong Show” productions at the Pearson Lakes Art Center in Okoboji.

A devout Episcopalian, Kay was a vivacious, independent, talented, positive fireball of a mother-wife-sister-friend-grandmother and a constant source of inspiration, encouragement and strength for her entire family.

A private church service was held on September 9 in Overland Park, KS. Memorials for Kay may be sent to the Iowa Great Lakes Association, PO Box 468, Okoboji, IA 51355.