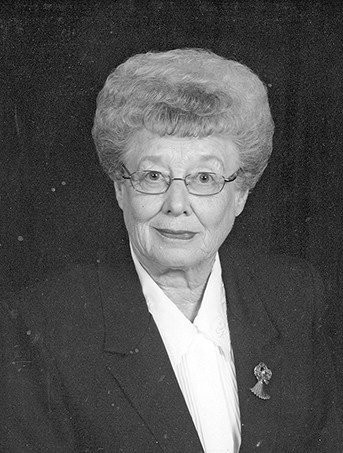 Beverly Ann Berkland, daughter of Alvin and Luella (Meyer) Potratz, was born June 11, 1934 on her parents’ farm near Fenton, Iowa. She began her education at country school for grades 1-3 and then attended parochial school at Lotts Creek for grades 4-8. She graduated from Fenton High School in 1952.
On August 1, 1952, Beverly was united in marriage to David Berkland at her parents’ farm. David and Bev were blessed with three children.

In 1953, David and Beverly began farming on a farm 2 miles west and 3.5 miles south of Fenton, where they resided for 54 years. They raised corn, beans, hogs, cattle and chickens. They also had milk cows in their early years of farming. Like a true farm wife, Bev walked beans, sorted hogs, gathered eggs, butchered chickens, made sausage, pasteurized milk, rendered lard, delivered lunches & cooked tasty meals for farm workers. She was an avid gardener, which involved freezing vegetables, canning fruits, making jam, and harvesting fresh asparagus. She was also a talented baker of cookies, cakes, bars, pies, and desserts to satisfy the tastes of family, friends and neighbors. Bev was a talented seamstress in her younger years and even took tailoring lessons from Wady Kapustynski in Emmetsburg at one time. Only their daughter, Paula, was blessed with a large wardrobe of homemade clothes and Bev even tackled a spring coat for herself for Easter one year.

Beverly was baptized in 1934 and confirmed in 1948 at Immanuel Lutheran Church, Lotts Creek. She was a devoted and active member of St Luke’s Lutheran Church at Fairville where she taught Sunday School, attended Bible study, sang in choir, and played organ for many years. She also enjoyed duties in the Ladies Aid & LWML activities. Her children cherish their bedtime devotions from “More Little Visits with God.” Daily “Portals of Prayer” and Sunday “Lutheran Hour” were a part Bev’s life until her passing.

Bev loved music. She enjoyed singing, ballroom and polka dancing, and listening to Lawrence Welk and Bandwagon. She also enjoyed playing cards with family and friends, especially Pass the Card, TIC, 500 and Pinochle. Bev enjoyed attending Okoboji Summer Theatre productions and concerts performed by The Expressions, Barbershop Chorus, Glenn Henriksen and other community groups. Bev loved to talk with people in person or on the phone and keep up with their lives and happenings. Occasionally Bev would enjoy buffet lunch and fun at the casino. Pizza Ranch was a favorite place to enjoy some chicken & conversation with others. Bev especially enjoyed family dinners for birthdays, anniversaries & holidays. She was a devoted Christian and loving wife, mother, grandmother, sister, aunt and friend. She was soul mate and caregiver to David and many others.

Bev was preceded in death by her husband, David Berkland; parents, Alvin and Luella Potratz; and David’s parents, Ernest and Sylvia Berkland.