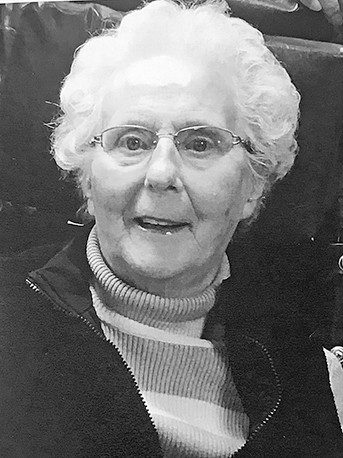 Ardyce Mae Rueter, daughter of Arthur and Anna (Brenne) Anderson, was born on December 2, 1934, in Lakefield Minnesota. Ardyce was baptized and later confirmed in the Lutheran faith at Bethlehem Lutheran Church in Lakefield. She lived her youth there and attended Lakefield Public School. After graduating in 1953 she worked at the Farmer’s State Bank in Lakefield. On April 27, 1957, Ardyce married Charles Henry Rueter of rural Harris, Iowa. They farmed and made their home in the Harris area until 1993 when they semi-retired and moved to their home in Lake Park, Iowa.

Ardyce was a member of Concordia Lutheran Church and the ladies bible study group. She enjoyed being with her family, golfing, bowling, cooking and baking, traveling, reading and watching the birds. For many years Ardyce had a huge garden and enjoyed taking care of her beautiful flowers. She especially loved taking care of her grandchildren and attending all of their events. Ardyce was a long time member of the O’Sirrah Club and a 4-H leader for her girls. Chuck and Ardyce spent many winters in Arizona with new and old friends. They enjoyed square dancing and playing cards. They especially enjoyed living close to the city park and campground and walking and meeting neighbors.

For the past six years Ardyce has resided at Accura Health Care Center in Spirit Lake, Iowa, where she was cared for by some beautiful people. They became like a second family to Ardyce and her family.

Ardyce was preceded in death by Charles, her husband of 57 years, her father and mother, sisters, Adelaide, Evelyn, Violet, Agnes, Ruby and baby Annabelle in infancy.