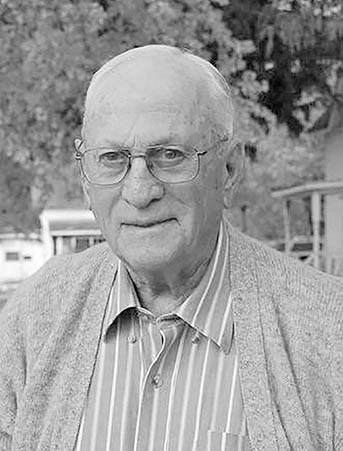 Wayne Wilford Kress was born to Charles and Amy (Carrigan) Kress at their home south of Ayrshire, Iowa, on July 10, 1921. Wayne was only one and a half years old when he lost his father, and he spent his childhood years with his mother and siblings as tenants on different farms. They farmed with horses in the beginning and eventually converted to mechanical equipment. The family rode to town in a horse-drawn buggy until they bought their first vehicles – a Ford Model T and then a Model A.

After walking or riding in a horse-drawn school bus to country school and attending six other schools in Palo Alto, Clay, and Buena Vista counties, he transferred from Dickens to attend high school in Gillett Grove where he graduated in 1939. He continued to farm in the Dickens area until he and his mother purchased a farm and moved to Webb in 1945. This farm became his home for the next 62 years.

Wayne married Shirley Eriksen from Spencer on March 9, 1952, and together they raised three children, Julie, Debbie, and Russell. His farming years were spent planting and harvesting corn and soybeans and at times raising cattle, hogs, and chickens. Most repairs on the farm were done by Wayne and he taught his children to be handy at making repairs. He helped his children with 4-H projects and served on the county 4-H Board for two terms and on the Clay County Board of Review for several years. After his son Russell graduated from college, they began farming together; and at age 73, Wayne retired and turned the farming operation over to Russell.

For over thirty years, Wayne and Shirley also owned a home at Millers Bay in Wahpeton. On weekends, he enjoyed visiting with neighbors, hosting family vacations, and boating around the lakes. At retirement, they began to spend winters in Mesa, Arizona at the Mesa Spirit RV Resort. Their time there was spent with other friends from Clay county, other Iowans, new friends from other states and Canada and visits by their children and grandchildren. Wayne had a gift in that he could carry a conversation with anyone even strangers although farming usually entered the conversation.

In 2007, they moved to a condominium in Spencer. Although Wayne enjoyed the convenience of their new home in Spencer, he missed the peacefulness and openness of farmland. His new favorite pastime became taking a drive out in the county. Many trips were made to Webb and the surrounding communities to check the crops and look at the land. He also enjoyed reading western books, watching old westerns on TV, and riding his stationary bicycle four to five times a week.

Wayne passed away at Spencer Municipal Hospital on January 18, 2021, at the age of 99. He was preceded in death by his parents,his son Russell,two brothers: Bruce and Jerry and two sisters,Berniece Talley and Phyllis Kress.